A vision for the visually-impaired 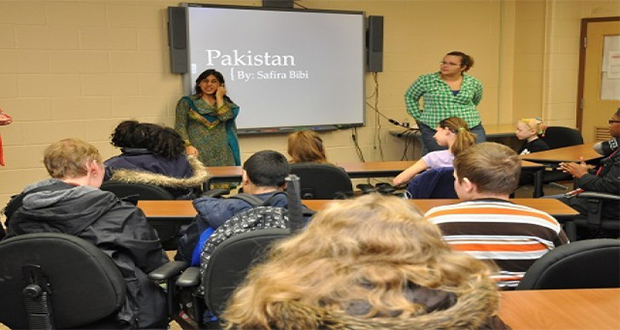 KARACHI: After three-and-a-half years of successful struggle, 24-year-old Safira Bibi is ready to embark on a journey to her hometown in Gilgit’s Yasin Valley.
“It is time she goes back to her home and relax,” her brother said. “It’s been a long journey and she still needs to fight when she comes back.”

Safira, a visually-impaired student of University of Karachi’s (KU) mass communication department, lives in a small flat in the Garden area with her parents and two brothers.
Her home has no sofa to sit on, but a carpet and cushions. “This is how our homes are back in Gilgit. We follow the same in Karachi,” said Safira with a pleasant smile.

She is suffering from retinitis pigmentosa, which is a group of rare, genetic disorders that involve a breakdown and loss of cells in the retina, the light sensitive tissue that lines the back of the eye, due to which she has 5% vision.

Pakistani student creates a device for the visually impaired

But that is not what her story is about. Her story is one of wounded loyalties, dignified pathos and increasing self-reliance. She became the first visually-impaired student at KU to give her exams on her own through a screen reader software, JAWS, on a laptop. The visually-impaired students give their exams through a writer, who they have to bring along with them on the exam day.

Safira studied at the Ida Rieu School for Blind and Deaf and appeared for her matriculation exams with a writer. “I did not know of any other option back then,” she said.

She ended up going to the United States in 2012 as part of an exchange programme facilitated by the Kennedy-Lugar Youth Exchange and Study programme. “This changed my life,” she said, adding that she was admitted to blind school, Kentucky School for the Deaf, located in Kentucky, US.

Read the full article at: Tribune